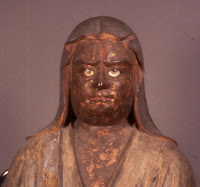 Lecture description: The production of copies is part of the tradition of East Asian visual culture. Not all copies are fakes and many have monetary value, sometimes more than the original. Understanding the different contexts in which copies were produced helps understand how to evaluate them. This presentation introduces the wide variety of Chinese and Japanese arts that are commonly copied, showing how some are copied for legitimate reasons, and others for deception. I draw on my experience as both a scholar and appraiser of Asian art, using examples of objects I have seen and studied over the years. Discussion will focus on some of the most popular types of Chinese and Japanese arts collected in the since the late 19th century, including secular paintings, Buddhist painting and sculpture, Japanese prints, ceramics, cloisonné, glass, jade, and netsuke, and show comparisons of real and fake examples. Currently, the issue of forgeries is particularly pertinent and vexing because these have increased substantially and become more difficult to discern in recent years, due to technological advances.
Posted by Pat Graham at 9:27 AM