I'm going to be very busy in January and February, giving a variety of lectures. Here's my lecture schedule: 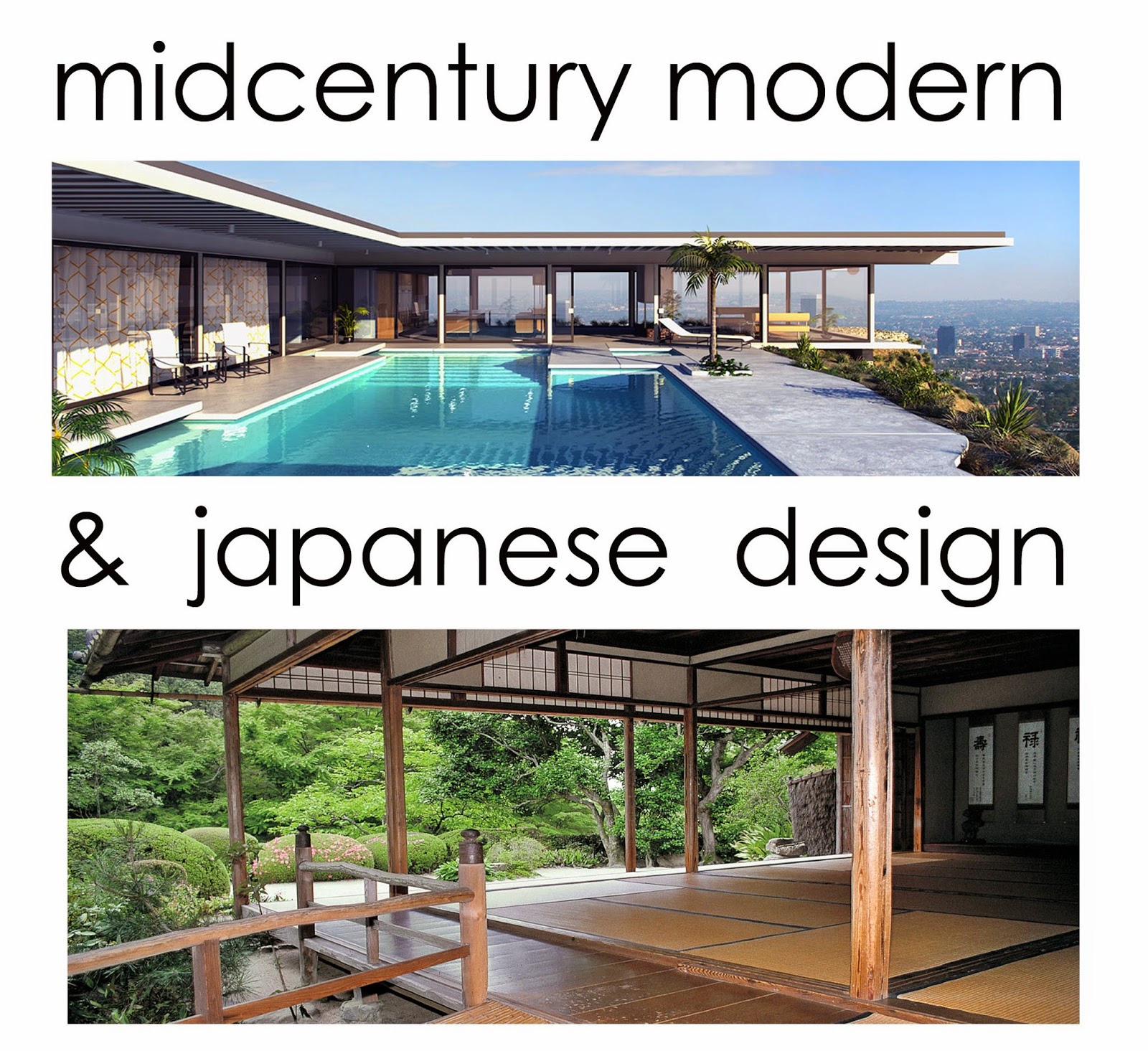 3 PM January 11, 2015, at the Lawrence, KS, Public Library.
MIDCENTURY MODERN & JAPANESE DESIGN
A lecture based on research for my new book, Japanese Design: Art, Aesthetics, & Culture; sponsored by the Lawrence Modern group, in conjunction with the Lawrence Public Library and the Center for East Asian Studies, University of Kansas, with a book signing arranged by the Raven Bookstore. 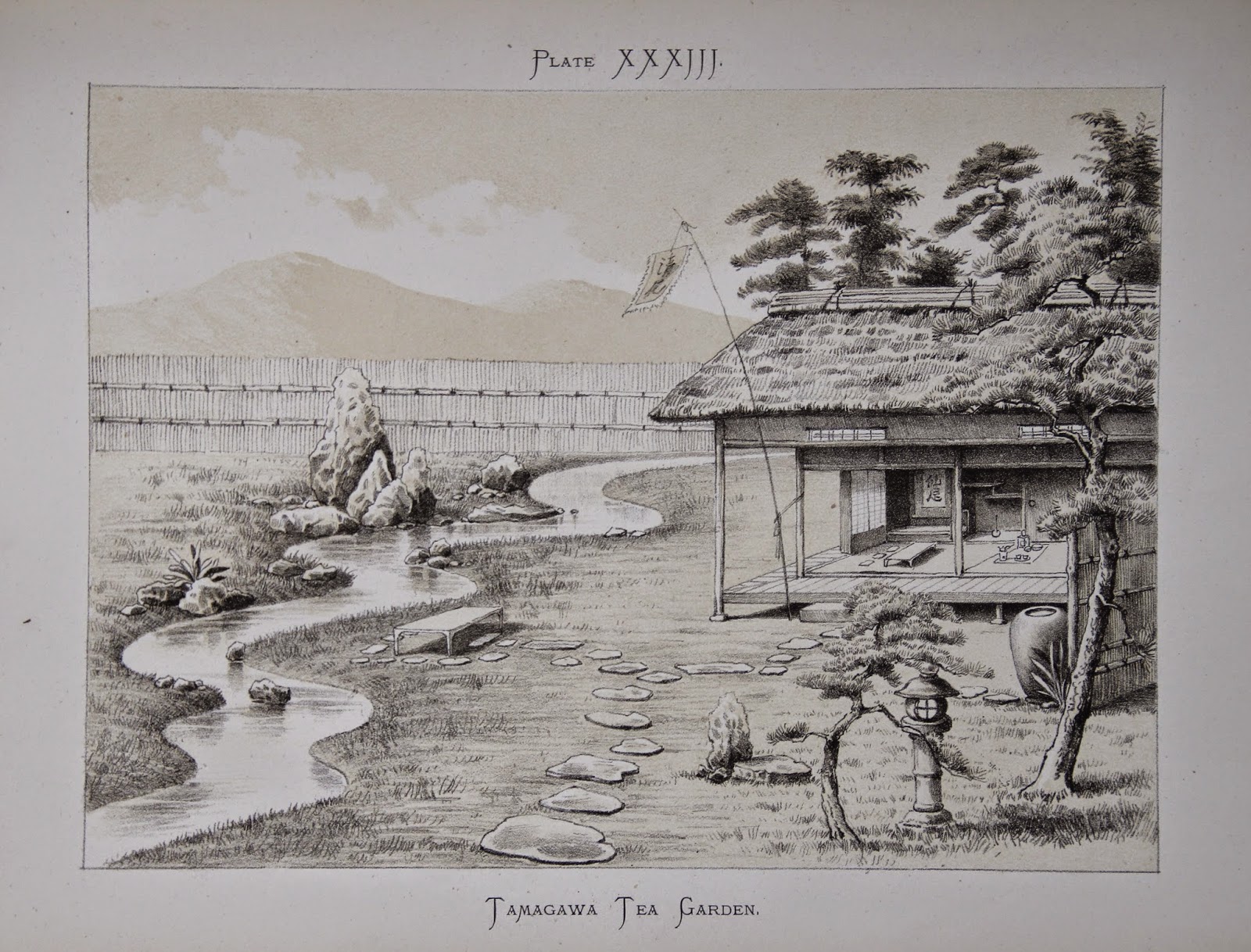 7:30 PM January 20, 2015, The Huntington Library, Pasadena, CA
SEARCHING FOR THE SPIRIT OF THE SAGES:  THE JAPANESE TEA CEREMONY FOR SENCHA
A lecture derived from my earlier book, Tea of the Sages: The Art of Sencha and subsequent research. The lecture is part of an ongoing series in celebration of the 100th anniversary of the Huntington's Japanese garden and its new teahouse. 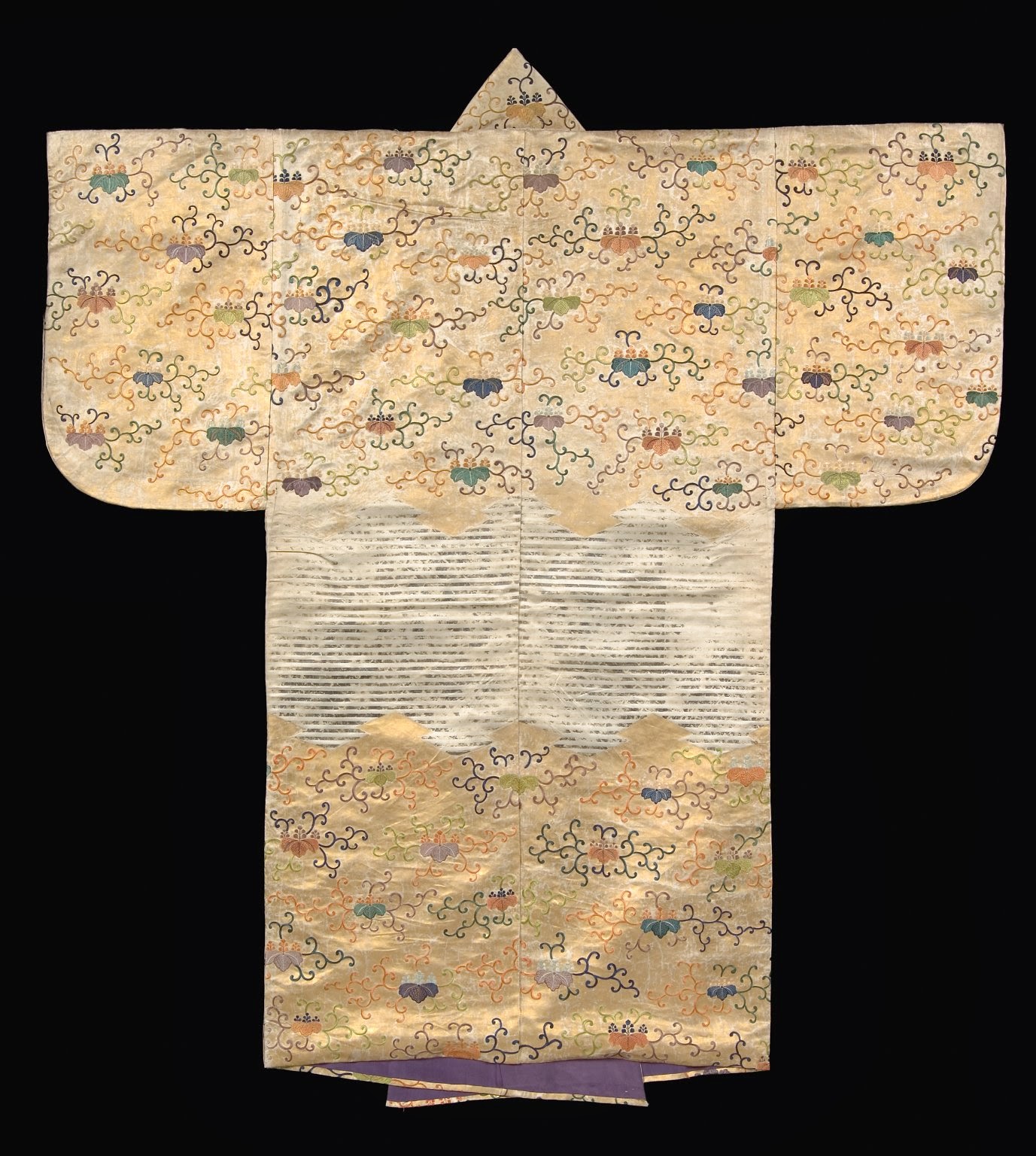 January 23, 2015, University of Southern California, Los Angeles (time & place not yet announced)
LANGDON WARNER'S VISION FOR THE JAPANESE COLLECTION AT THE NELSON-ATKINS MUSEUM OF ART, 1930-1935
My presentation is part of a two-day conference on "Ideas of Asia in the Museum," January 23-24 (the talks on the 24th will take place at the Los Angeles County Museum of Art).

A public presentation based on my new book. The talk in San Diego is sponsored by the museum's Asian Arts Council. The talk will explore the varied formal characteristics of Japanese design, the religious and cultural factors that contributed to its creation, and the writers, both foreign and Japanese, some famous and others nearly forgotten, responsible for creating worldwide awareness of and sustaining interest in Japanese design from the 19th century to the present.

The law firm Pearlstein & McCullough has posted a useful FAQ about the new regulations restricting trade in endangered species artifacts (focusing on ivory, mammoth ivory, & rhinoceros horn), especially as they pertain to New York State. It requires people who wish to continue such trade for articles made of these materials that qualify for exemptions to the rule. The law firm's FAQ includes a very useful guide in table form for consumers, "What can I do with my ivory articles or rhinoceros horn?"
Posted by Pat Graham at 6:36 AM

WHERE TO BUY FAKE CHINESE ANTIQUITIES

The World of Chinese online magazine has a very interesting article by Ginger Huang, posted August 3, 2014, "The Antique Hustle," that describes how prevalent the forging of Chinese art is in China. She says that the place to buy these in Beijing is Shilihe Antique Plaza, just south of Panjiayuan, China's "CBD of antiques" (just south of Guomao). She also describes how so-called scholarly experts, who work in museums and research institutes are too far removed from the world of the antiques trade to be able to spot fakes and so having authentication from these people is no guarantee of authenticity. The article describes how before 1949 experts were university trained, but because of the Cultural Revolution, that lasted through the opening up of China to the West in 1978, people were forbidden to study historical relics and the younger generation of scholars lacks the continuity of learning from their elders. Furthermore, since the late 1980s, counterfeiting has gotten very sophisticated and harder to detect. A recent scandal that came to light, recounted in the article, made the headlines with the title"Forbidden Palace Experts No Rivals for Henan Peasants." Forgers, often peasants, specialize in different types of fakes. Some, for example, grind up ancient Han dynasty bricks to produce fake pieces that fool the scientific tests. The bottom line: BUYER BEWARE AND CONSIDER PROVENANCE* BEFORE PURCHASING CHINESE ART.

*Take heed that although papers might indicate a piece to have been owned by someone's relative or friend for many decades, before the prevalence of production of these recent fakes, these documents too are often forged. That is why pieces coming out of older foreign collections with undisputed chain of ownership records command the highest prices these days.
Posted by Pat Graham at 6:32 AM

Another record has been set in the Chinese art market. The Chinese collector Liu Yiqian bought a 600-year-old imperial embroidered silk artwork at a Christie’s sale on Wednesday for $348 million Hong Kong dollars ($45 million dollars), setting a record for any Chinese work of art sold by an international auction house. This is the same collector that purchased the Ming Chenghua era "chicken cup" in April this year for US$36 million dollars. He bought both pieces for his Long Museum in Shanghai. The artwork purchased is a huge thangka made of silk embroidery, depicting Raktayamari, ‘The Red Killer of Death’, a devotional Buddhist deity. Made to order for the Ming dynasty Yongle Emperor, the thangka is the only one of its kind in private hands, according to Christie’s. The two other known examples are both kept in the Jokhang Monastery in Lhasa, Tibet.“It is a national treasure,” Mr. Liu, told The Wall Street Journal. “We need top art works for our museum.” 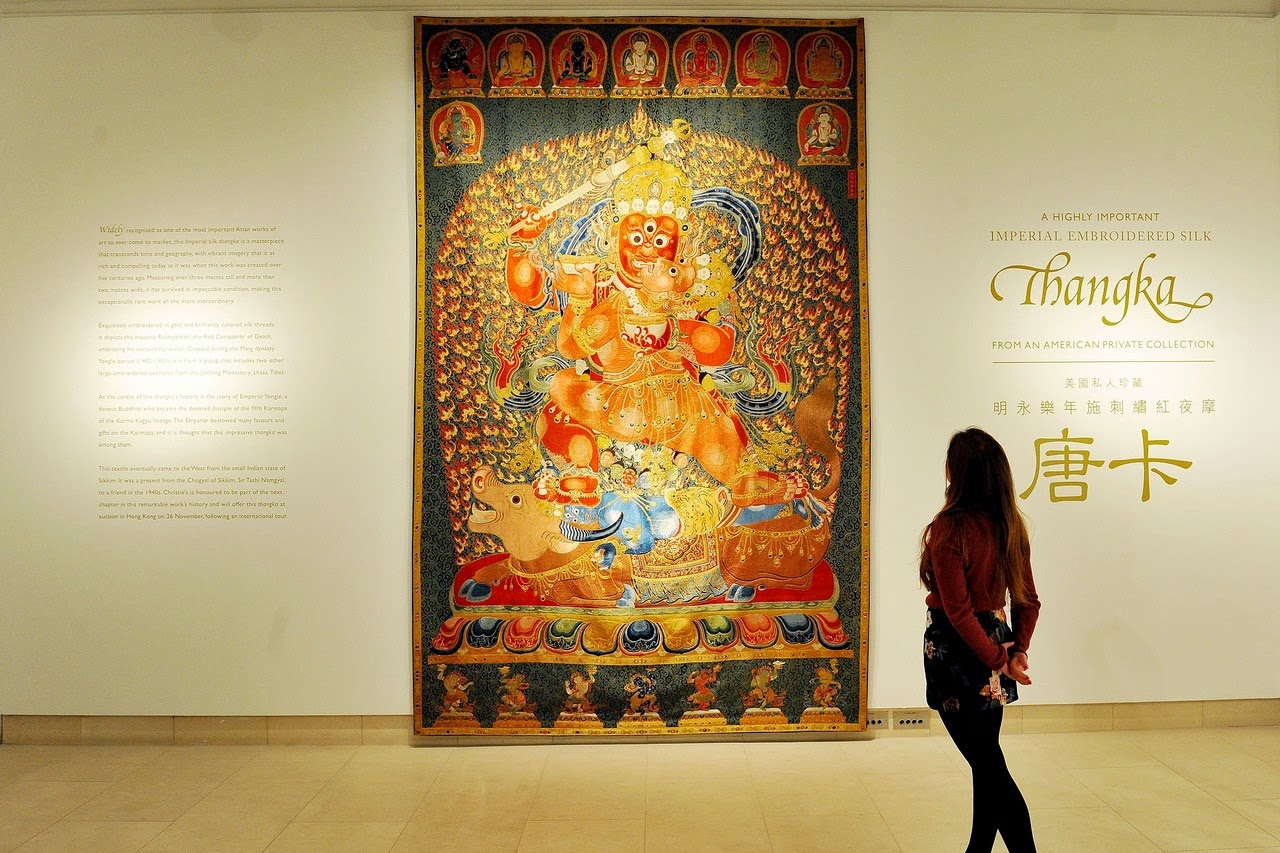 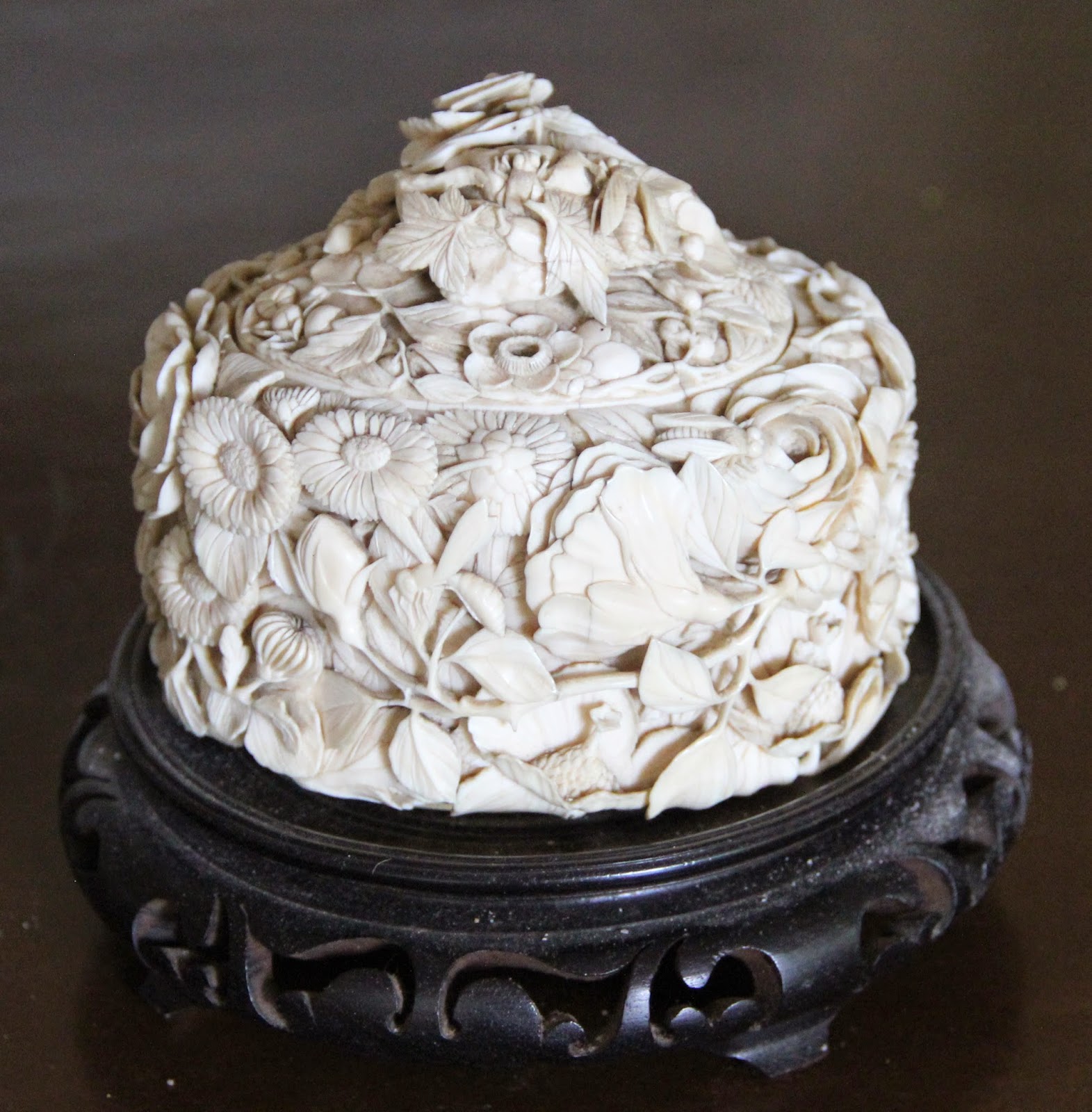 The biggest concern in the Asian art market (and the antiques market generally) at present is the overly restrictive new regulation of the sale of objects made from endangered species (including ivory) that the U.S. Fish & Wildlife Service has enacted this year, known as Director's Order #210, along with even more restrictive regulations promulgated by several states including New York and New Jersey (that other states are now considering). These new rules make it virtually illegal for auction houses and dealers to sell and ship most antique ivory artifacts.They are in the process of being modified, however.

A lot has been written about this by critics in the art world recently. Among the best and most concise is a commentary by Lark Mason, published in the ART NEWSPAPER, #262, Nov. 2014.
See also a short report on the NY regulations regarding the "deceptive" ivory trade, June 18, 2014, by attorney Michael McCullough of the law firm  Pearlstein & McCullough

The US Fish & Wildlife Service has a web page with useful images to help distinguish ivory from other types of animal tusks. But still this is hard for novices to do and I recommend that when in doubt, consult an expert.

For information on the ongoing saga of these regulations see the website FIXESA.ORG

First Review of My New Book!

I am so happy people seem to like my new book, Japanese Design: Art, Aesthetics, and Culture. A review has been published online.

Yet Another Article on the Flood of Fakes from China

A friend just alerted me to this article from the China Daily USA, "'ANTIQUES' are not as old as they look," that I had previously missed. I can't say this too often--basically collectors need to BEWARE when buying antiquities with no provenance because most are likely to be recently-made fakes produced throughout China (the article even helpfully includes the map below of where certain types of arts are produced). 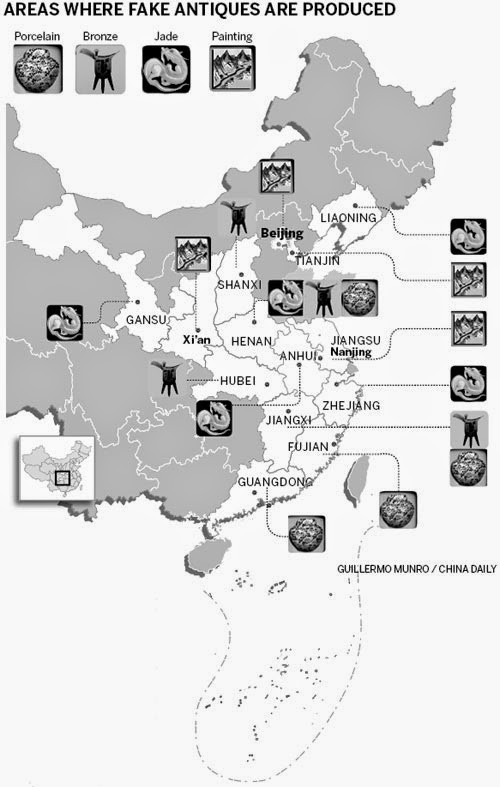 My new book on Japanese design is now available on Amazon.com at a discounted price (regular price is $24.95). It will be released in the USA on September 30.  Because Amazon is so important to book sales these days (even more than brick and mortar bookstores), I have been urged by my publisher to encourage potential buyers to pre-order the book so as to raise its ranking.
I am very happy with the design of the book and hope all my readers will be too!. 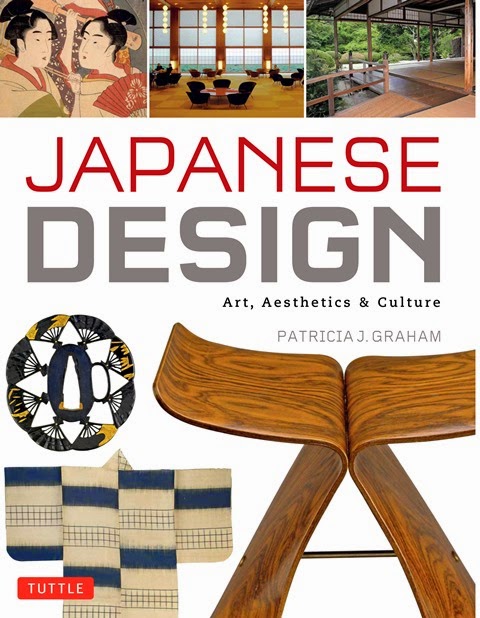 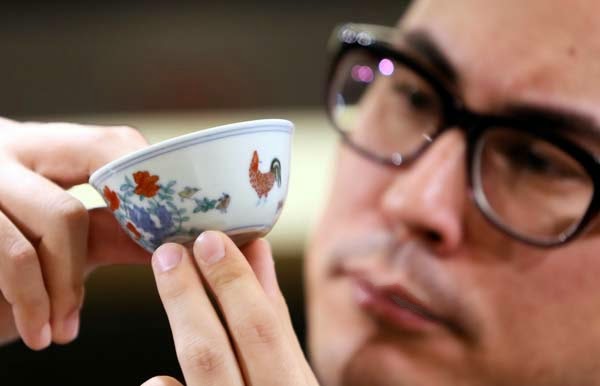 The Financial Times has an interesting article today: CT Loo: champion of Chinese art ... or villain? 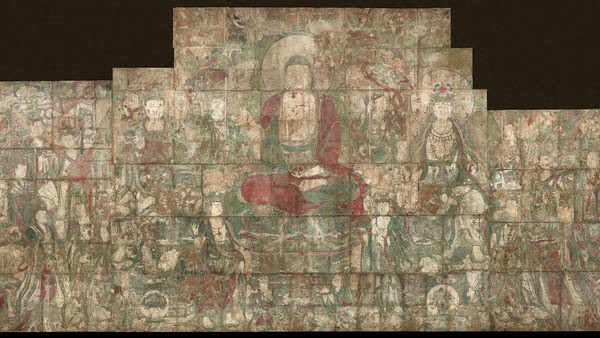 Among the many famous pieces he sold to museums worldwide is this mural at the Nelson-Atkins Museum of Art in Kansas City, that I and my friends who studied at Kansas have studied and admired for decades.
Posted by Pat Graham at 10:57 AM

An interesting article (in which I was quoted) about the sky-high Chinese art market.
The St. Louis Art Museum recently attempted to bid on a Yuan dynasty (14th century) porcelain dish at auction in New York. Not too surprising to me that they failed, alas. See the article here. 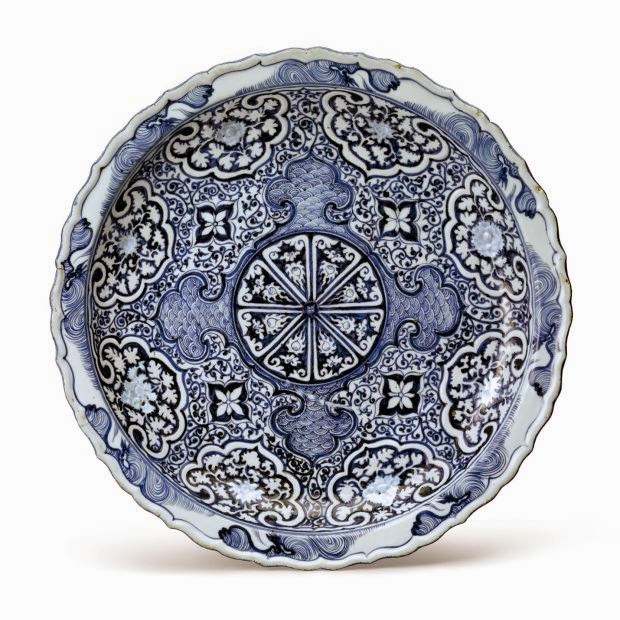 The Art Daily just published a good overview of dealers' & auction house experts' recommendations for what to buy at Asia Week this year that is affordable. When reading it though, remember that these are the recommendations of the people who are trying to sell you the art. Still, their recommendations are, for the most part, wise. BUT they leave out two important facts: there are a LOT of fakes out there of many the types of art they are selling, so its always BUYER BEWARE (that's why provenance matters), and many types of affordable art (such as Japanese scrolls) are easily damaged by exposure to light and so should not be continually displayed and kept out of sunlit rooms.
Posted by Pat Graham at 8:17 AM

The Chinese Contemporary Art Market - According to Forbes