1. If a client living in NY State has antique ivory (over 100 years old, appraised as 15th century by Sotheby's 35 years ago and then worth $50K) and inherited many years ago from an aunt, can they legally sell it within or outside NY State?

-If it is a solid ivory object, no. To sell outside NY, they have to get a permit, which will not be forthcoming. It is not as clear regarding dual residency. The NY law is potentially in conflict with Federal law, but until a lawsuit is made, it is a problem. If the object contains 20% or less of ivory and is over 100 years old, it can be sold with a permit in NY.

2. If a client in South Carolina has a late 19th-early 20th century Japanese (Meiji period-datable by style), ivory carving, can that be legally sold at auction in the US?

- Yes, provided proof can be shown that:
A. it has been in the US prior to 1982, via an old appraisal, old dated photo, customs import document, or bill of sale. An owner's statement is not enough.
B. it is in a state that allows the sale of antiques containing ivory.
C. it is accompanied by a statement from an expert - who is not benefiting financially - that supports the age and the material identity showing it is African elephant ivory and not Asian elephant ivory.

3. A client has a large group of mostly 20th century ivory carvings - can these be sold somewhere?

-This depends. If the owners can prove they owned it prior to 1982, can have a statement from an expert, and the object is being is sold in a state allowing the sale, then yes.

Keep in mind, final rules will be published soon and we expect these will eliminate the African elephant ivory exception and make all under 100 year old items saleable only in the state where located except those which are composed of 20% or less of ivory. These will still have to have a statement from an expert and proof of purchase/ownership prior to 1982.

The change will also create a situation where an owner in NY or NJ or other states with prohibitions will be unable to obtain permission to sell in the state and unable to take the item out of that state (violates interstate commerce prohibition) and thus will be unsaleable anywhere.

4. Do you have any suggestions for what can people do with the mounds of ivory objects that are accumulating, unable to be sold, stored away in closets and cabinets?

-Right now, the main issue is that of the 1982 acquisition date. If the owner can satisfy that requirement, then it can be sold into interstate commerce, if the state where the owners live allows sale of ivory. If they cannot, they can still sell these, but ONLY in the state where located (provided the law of the state allows) and ONLY to a resident of that state.

For those owners whose objects can be proven to have been acquired before 1982, even if under 100 years old, these can be sold provided the 1982 date and the independent statement is made proving the object is African and not Asian. As to how to tell the difference, the Administration created this rule knowing that a DNA test would make 99.9% impossible to test either due to small size or cost. However, it is possible to use records of commercial activity to prove where African vs. Asian ivory was manufactured into objects.

However, once the final rule eliminates the distinction between African and Asian ivory, nothing under 100 years old that contains more than 20% ivory will be able to be sold across state lines. Nothing. And those items that are in states with prohibitions, such as NY, will have NO value but will be valued by the IRS just as with the "Eagle" case.

The "Eagle" case refers to a sculpture titled "Canyon," which incorporates a stuffed bald eagle, by artist Robert Rauschenberg that children of the owner inherited when she died in 2007. Because the work includes a bird under federal protection, the heirs would be committing a felony if they sold it. So their appraisers valued the work at zero dollars. But the IRS took a different view. They appraised it at $65 million and demanded the owners pay $29.2 million in taxes. So the heirs had a choice: they could either (a) keep it and come up with $29 million, (b) sell it and go to jail for unlawful sale of endangered species material, (c) refuse to pay the tax and go to jail for that, or (d) accept the IRS valuation and pay the $29 million, then donate the sculpture to charity and take a relatively small charitable deduction every year. Ultimately, the IRS agreed that if “Canyon” were donated to a museum, which it eventually was (to the Museum of Modern Art, New York), no estate tax on it would be levied. Information on the case is here, NY Times article 7/22/2012:

Another article, in the online journal, wealthmanagement posits this question: "A recent settlement between the taxpayer and the IRS leaves unresolved the obvious legal issue: Can the government prohibit by statute the existence of a marketplace and, nonetheless, assert the imposition of its estate tax based on its “fair market value” standard of a willing buyer and willing seller?"

5. If a person is unable to sell ivory because he lives in NY or another state that prohibits sales, can they donate it to a museum and take a tax deduction for the donation?

-They can donate the ivory to an institution but states prohibiting the sale of such material will not allow for them to take a deduction for the donation given to an institution in their state. The same is generally true for donating to an institution out of state; however, it all depends on the state where the museum is located. From a Federal standpoint, it is possible to get a charitable donation but state regulations are different. This is very complicated and it is best to consult an attorney familiar with the Endangered Species Regulations.

-posted with thanks to Lark Mason for his clear and insightful responses to my questions.
Posted by Pat Graham at 10:01 AM

I am often asked to appraise art people have bought in the past 10-20 years. These items include objects acquired impulsively during casual trips to Asia, from estate sales, or even from thrift stores, all for low prices, or occasionally purchased from non-specialist dealers or those catering to decorators. Many people think they are getting good buys. Most will be disappointed with my conclusions. It is always imperative when building a serious collection to study the type of art you are interested in yourself, consider provenance (history of past ownership) when purchasing objects, and buy from reputable dealers or auction houses.

A recent high-priced sale of a British collection of Chinese antiquities assembled in the 1950s and '60s shows why this matters. 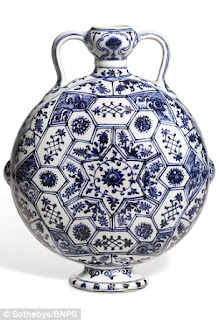 Art of the Silk Road & Japan 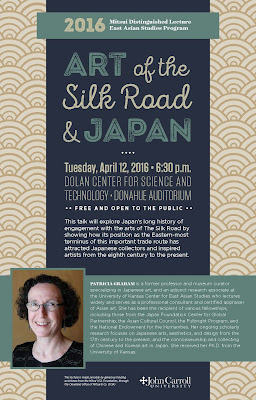