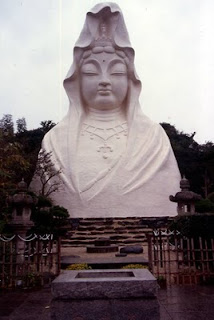 Presented at: the annual meeting of the Midwest Art History Society
Omaha, NE, April 9, 2010
on the pane 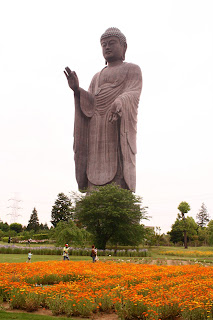 l: MONUMENTALITY IN MODERN AND CONTEMPORARY ASIAN ART AND ARCHITECTURE

My recent book, Faith and Power in Japanese Buddhist Art, 1600-2005, highlighted a wide body of Buddhist icons and structures neglected by most art historians who only consider Buddhist materials of much earlier eras as worthy of study and the core of Japan's traditional artistic canon. This paper considers one of the most ubiquitous types of recent Buddhist icons in Japan, monumental Buddhist statuary, that are universally derided by scholars as Japanese kitsch and not worthy of consideration. My paper charts the history of these large Buddha-buildings and argues for why they should be taken more seriously. Makers of giant statues in the modern period have become increasingly preoccupied with testing the limits of new technologies to create images of unprecedented height and many of these can be entered. Disregard of them, and virtually all of Japan's formal Buddhist art, on the part of scholars has occurred for a number of reason. First, when the Japanese artistic canon was created in the late 19th century, scholars focused on ancient and medieval Buddhist statuary because of its association with Japan's elite rulers—courtiers and powerful samurai --who demonstrated to the world that Japan possessed an elite culture like that of the European nations with whom they sought parity. As they strove to position modern Japan as superior to the backward culture of the nation's immediate past, where Buddhism and its art featured prominently, these men also disregarded modern Buddhist art because it did not emphasize Western concepts that valued originality and individual artistic creativity but instead stressed adherence to strict iconographic models to assure religious efficacy. Also, they and later scholars have ignored modern Japanese Buddhist art because of their widespread disdain for the formal practice of Buddhism in modern and contemporary Japan, considered no more than a business that makes money from masses of devotees who fork out large sums for funerary services for loved ones. Finally, because these new monuments incorporate new technology and contemporary religious values which to some seem more like entertainment than solemn devotional rituals, their cultural authenticity and religiosity are questioned. I believe this is a mistake, that these monuments deserve greater recognition—not only as technological achievements but as reflections of new ways practitioners engage with their faith. They are potent symbols of a modern, transnational Buddhist art.
Posted by Pat Graham at 8:20 AM