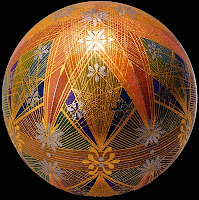 Paper presented at the conference: Places at the Table: Asian Women Artists and Gender Dynamics, of , , September 13, 2008


Kirikane, the graphic technique consisting of luminous, minute patterns in cut-gold leaf, often applied in conjunction with mineral colors, is a distinguishing feature of many of the finest Japanese Buddhist paintings and sculpture. This technically challenging art dates back to the seventh century C.E, when it was introduced from . How two talented and dedicated women – Eri Sayoko (1945-2007) and Nakamura Keiboku (active professionally since 1980) – have been working to preserve and revitalize this tradition in today is the subject of this talk. Their achievements are significant because the art form in which they specialize was formerly dominated by men. Their ability to achieve success in this art hints at monumental changes to Japanese society in the post World War II era. Most well-known contemporary Japanese women artists work in non-traditional art forms and seek international recognition. But, as these two women reveal, women have also made inroads and assumed leadership roles in endangered, conservative craft traditions such as kirikane, from which they were formerly, publicly excluded. Tragically, Eri Sayoko passed away suddenly last year at the peak of her career, five years after being designated as a Living National Treasure.

Discussion of contemporary Japanese women artists rarely mentions women like Eri and Nakamura because of the structure of artists' organizations in . Although old Japanese Buddhist paintings are considered fine art, the work of makers of Buddhist sculpture and painting today are designated by the Japanese art establishment as "art crafts" (bijutsu kōgei). As such, artists who specialize in these art forms gain recognition for showing their work in domestic craft, rather than fine art, exhibitions. Rarely are these arts shown abroad. Furthermore, both Nakamura and Eri work closely together with their husbands (Mukoyoshi Yuboku and Eri Kokei respectively), both Buddhist sculptors, in their own small ateliers (of the sort traditionally headed by men), to create imagery for use by Buddhist institutions and their lay followers as sacred religious icons.

Yet Eri and Nakamura have themselves been quietly working to reinvigorate this conservative Buddhist painting tradition through their deep study and original conceptualizations of kirikane and Buddhist painting. Eri applied inventive variants of traditional Buddhist kirikane patterns on elegant, secular functional objects that harmonized with modern aesthetic sensibilities, including screens, wall hangings, and small boxes. Her original designs were highly acclaimed. Nakamura is now engaged in an approximately four year project to create a replica of a set of two large, rare, thirteenth century mandala paintings long ago removed from their home temple, which has requested the copy. Collaborating with religious studies scholars, temple priests, and conservators, she is recreating the original appearance of the much-damaged original through meticulous study of historical design motifs and technical analysis of pigments. Her completed mandala and the data she gathered to create it will prove an invaluable source for the understanding of the original appearance of the colors and designs on early Buddhist painting. The work of these two artists reveals a rarely addressed aspect of the contemporary Japanese art scene, namely that following a conservative artistic tradition can foster artistic creativity, offering both a window into the past and a path towards a future that still embraces tradition.
Posted by Pat Graham at 8:27 AM